A recent thread on the Django developers mailing list has been discussing adding class hierarchy diagrams to the documentation for generic class based views.

For me, this thread highlighted just how awkward the current implementation is.

Let's take a look at the class hierarchy for one of the views. The following is the hierarchy diagram for CreateView. 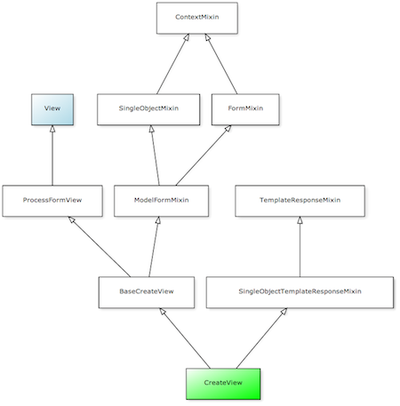 Yowzers, that's quite something.

It gets even more scary if we take a look at the inheritance diagram for the complete set of generic views. I'm not going to include that here, because it'll hurt your eyes.

The wonderful CCBV site makes working with the views much less painful, but it's still difficult to untangle the behaviour.

As an example, let's take a look through what happens when we make a GET request to CreateView. The calling hierarchy is listed below.

As an example, let's take a look through what happens when we make a GET request to CreateView. The calling hierarchy is listed below.

Here's Adrian Holovaty, co-creator of Django, commenting on the current state of affairs.

I'd suggest not using class-based views. They're way over-abstracted and not worth the cognitive burden.

It doesn't have to be this way.

The Zen of Python says:

I'm a big fan of class based views. We use Django's GCBVs extensively in our work at DabApps, and they save a lot of time and code. I don't enjoy the mixin style implementation, but they do what they need to and I wouldn't want to be without them.

Django REST framework also uses a derivative of generic class based views, where they're indespensible to super-fast API development with very little code. In REST framework, we've dropped the Django base implementations entirely in favor of a slightly more simplified version. There's only a single generic base class, and various parts of the API and implementation have been slimmed down. I find them vastly more pleasant to work with, and they're easy to manage from a maintenance perspective - questions on the mailing list don't tend to focus on usage of the generic views, and those that do are easily answered.

I've been meaning to take a similar approach to Django's standard GCBVs, and see if they could be redesigned with a nicer API and more obvious implementation.

The django-vanilla-views package provides essentially the same set of functionality as Django's existing GCBVs, but with:

The best way to get an idea of how django-vanilla-views differs from the current GCBV implementation is to take a look at its complete view hierarchy.

We've seen the inheritance hierarchy for the current implementation of CreateView, so let's see how the CreateView from django-vanilla-views looks by comparison.

Let's take a look at the vanilla-style calling hierarchy.

The difference is dramatic.

In django-vanilla-views we use broadly the same set of behavior, but simplify the implementations where possible. The end result is that the behavior is easier to understand and easier to override.

The generic view APIs have also been slimmed down slightly. The following view attributes that have been removed or replaced.

If you need slug based lookup, just set the attribute.

Removed. If you need a view that returns template names based on a field on the object instance, just write some code.

Removed. If you need a view that returns 404 responses for empty querysets, just write some code.

Removed. If you need a view that returns a different style of response, just write some code.

Aside: Building better API behavior directly into the class based views is a topic for another day's discussion, but it's worth noting that you might want to consider Django REST framework if you're building APIs with class based views.

It's okay that we as a community ended up with an awkward design for the generic class based views. The mixin design seemed like a good idea at the time, and no-one came up with a cleaner implementation. They fulfil their purpose, and it's a testment to the fundamental soundness of the concept that they are now so widely used. However, we do need to recognize that the current implementation and API is unacceptably complex, and figure out how we can improve the situation.

The current django-vanilla-views package is a first pass. It still needs documentation, tests, and perhaps also the date generic views. Any real proposal to modifying Django would also need to take into account a deprecation policy or migration guide. From my point of view django-vanilla-views seems like a huge improvement, and I'd really like community feedback on if and how we could go about getting something like this into core.

You might also be interested in our Python for Programmers training course, running in October and November this year.

To find out more, get in touch.